The City of Chicago recently released a new proposal to restructure the fees the city charges for rides people hail with transportation network companies like Uber, Lyft and Via. Currently, the City of Chicago charges a flat, per-trip fee for all TNC rides, regardless of whether the trip is a shared or solo ride, and regardless of where and when the trip occurs. The new proposal increases fees on solo rides, particularly those that begin and end downtown during times of peak congestion. Shared trips that begin or end in the downtown area would increase by a smaller amount, and shared trips between and within Chicago’s neighborhoods would actually see a small decrease in fees. A portion of these fees will go to support improvements to the city’s transit system, and the mayor also announced plans to conduct a broader study into congestion pricing in the coming months.

This proposal is a good step, particularly because it incentivizes shared trips over solo trips, and increases costs most in places where congestion is most acute and where there are many viable and affordable options to taking TNCs or owning/driving a personal vehicle.  Shared trips reduce emissions, keep cars off the road, and are more affordable for riders than solo occupancy trips. Affordability is particularly important for low-income residents, particularly those who don’t have access to a car and/or live in places with less transit availability. Under the current fee structure, a shared trip costs about 30-40% less than a solo trip of the same length.1  However, the average shared trip is still significantly more expensive than a transit fare. 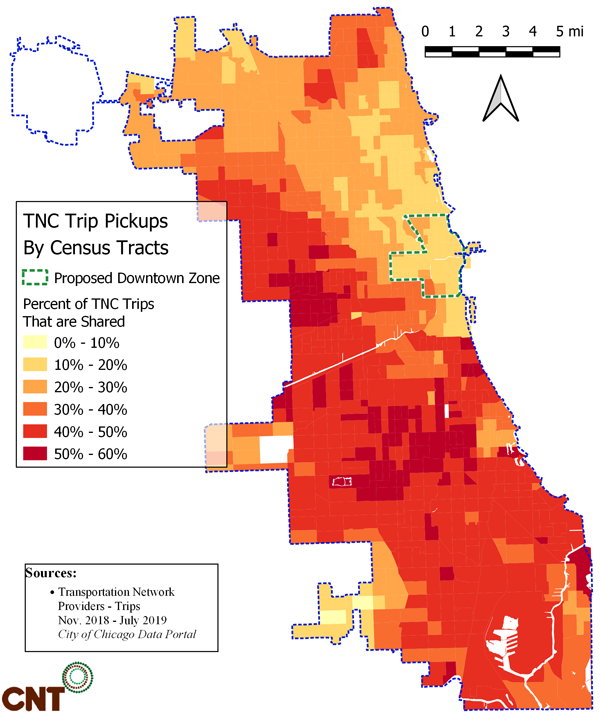 In addition to making more use of shared ride options, TNC users on the South and West sides are more likely to travel somewhere other than downtown. In fact, 50 percent of all trips to the downtown zone originate from just 20 census tracts, all but two of which are themselves in the downtown zone. The other two are O’Hare and the tract containing Soldier Field, McCormick Place, and the Museum Campus. 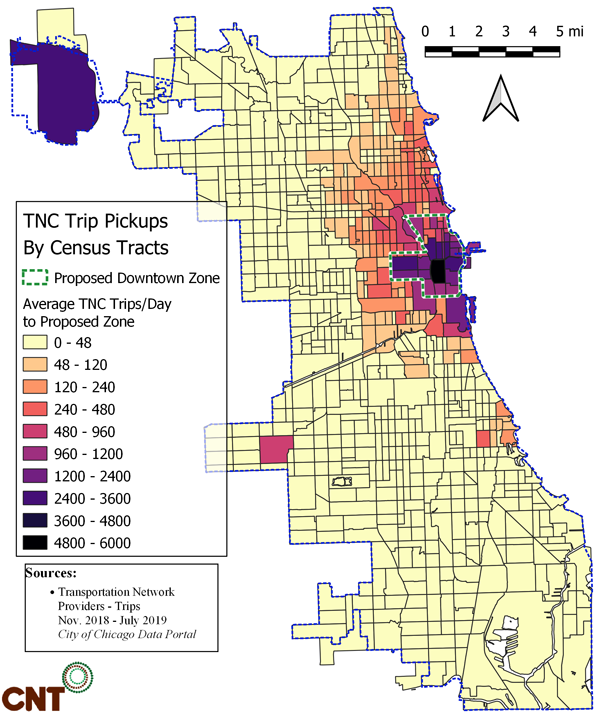 Previous studies have shown longer commute times on Chicago’s South and West sides, particularly in areas with high concentrations of low income residents and people of color. Disinvestment in these neighborhoods means residents must travel longer distances to reach destinations like grocery stores, medical care, and jobs. Under the city’s new proposed fee structure, shared neighborhood to neighborhood trips will be less expensive, while riders opting for TNCs downtown during peak hours will pay a premium to hail a TNC instead of biking, walking, or taking transit.

These changes to the TNC fee structure are an important step to increasing the efficiency, equity, and sustainability of Chicago’s transportation system. It’s important that the city and region invest revenue from these fees into the public transit system, and continue to explore other policy options that reduce the need for single occupancy vehicle ownership and use.

1Note: Not everyone who chooses the shared option actually ends up actually their ride. Between November and March, approximately 70% of shared-authorized trips picked up passengers at two or more destinations. There are also likely to be standard rides that are high occupancy—for example, when friends or family members ride together to the same destination—but the city does not have data on vehicle occupancy.