Who Will Really Pay The Most for New Ride Hailing Fees?
November 6, 2019

In the weeks since Mayor Lightfoot proposed changes to the tax structure for ride hailing trips, much of the discussion around the changes has centered whether they are equitable. The transportation network companies (TNCs), as well as community leaders and residents have raised concerns that increasing fees will make using ride hailing unaffordable in Black and Brown neighborhoods on South and West Sides, where incomes are lower, car ownership less common, and these services have the potential to fill mobility gaps for families. But TNC use data show that the city’s proposed new fee structure, which would reduce the cost of shared rides between neighborhoods and increase the cost of solo trips to and from downtown, is a more equitable structure than the current system.

The bulk of the money raised by the TNC fee restructuring will come from people using ride hailing services in transit-rich neighborhoods. To make mobility more equitable in the city as a whole, the revenue generated by the fees should support additional investment in transit service, biking, and walking in the neighborhoods that need these options the most.

71% of solo rides begin and end in the North Side, Loop, Near West, and Logan Square neighborhoods. However, 63% of shared rides taken in the city start or end on the South and West sides.

CNT has been analyzing the publicly available transportation network provider (TNP) dataset since the city first released it in the spring, particularly focusing on how equitable service is and its impact on transportation affordability. We found that solo ridership is heavily concentrated on the North Side of the city, downtown, and near-west neighborhoods like the West Loop and Logan Square. In fact, 71% of solo rides begin and end in the North Side, Loop, Near West, and Logan Square neighborhoods. However, 63% of shared rides taken in the city start or end on the South and West sides.

In addition, most trips on the South and West Side do not go to the downtown zone, but to other neighborhoods. For example, 87% of all trips to or from the Chatham neighborhood are trips within Chatham or between Chatham and other South Side neighborhoods. Reducing the fee on shared rides, particularly for shared rides between neighborhoods, makes them an even more affordable option in the places that use them the most.

The result of these two factors (higher use of shared rides, less travel to downtown) in TNC use in South and West side neighborhoods is evident in the map below. It shows the change in fee on the average TNC ride from a place under the proposed structure versus the existing fee structure. Assuming that TNC use patterns remain exactly the same, the average fee increases by between 25 and 50 cents per ride on most of the South/West sides, compared with increases of more than 2 dollars for trips originating near the Loop. The actual increase in fees is likely to be even less than what is shown here, as reduced fees incentivize more people to switch to shared rides. 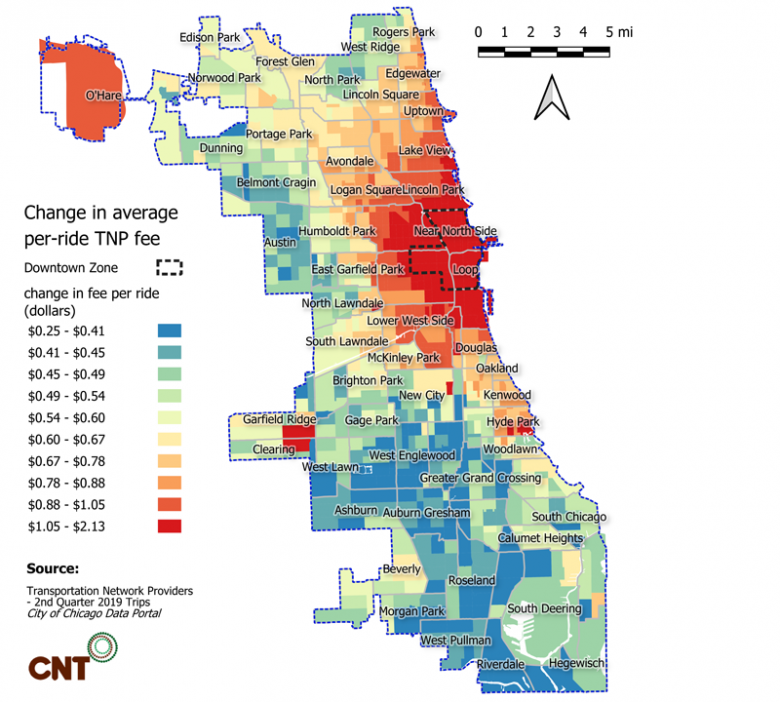 There are some trips for which shared rides are less feasible. This is because shared rides are defined not by how many people are in the car, but by whether the person who ordered the ride is willing to stop along the way to pick up additional passengers. If there are three or more passengers in a group requesting a ride, a shared ride might not even be an option. In a perfect world, the shared discount would be based the occupancy of the vehicle, but this information is not currently collected or provided to the city by the companies. Improving data collection, basing fees on occupancy, and expanding the fees to apply to delivery vehicles and personally-owned vehicles should all be considered as part of the congestion study the mayor is proposing.  There are also opportunities for the city, neighborhoods, and transportation network companies to work together to create programs that fill critical mobility gaps. Lyft’s recent announcement that it will work with several other nonprofits to provide free rides for people trying to get jobs, including rides to and from job training programs and job interviews, and rides to and from work during a person's first three weeks of employment, is a great example of this kind of program.