TNC use, Transit, and Vehicle Ownership in Chicago
October 22, 2019

Transportation Network Companies (TNCs) are increasingly significant contributors to the transportation system in Chicago. A recent study commissioned by Uber and Lyft estimated that Uber and Lyft rides represent 3.3% of VMT in Cook County. That figure is likely significantly higher in the city of Chicago, and particularly in some of the city’s most dense and congested neighborhoods. The city’s TNC dataset shows that different parts of the city are using TNCs differently, and these differences are often connected to other issues of transportation availability and affordability.

The highest concentration of TNC pickups are O’Hare and Midway airport and major activity centers near the Loop, but rides happened in every neighborhood of the city. The biggest predictor of TNC use is job and household intensity, but higher use is also correlated with demographic factors like household income and racial and ethnic compositions of communities.

TNC use is also closely related to other aspects of transportation behavior. These relationships point to the ways in which TNCs can supplement transportation options, but also to the fact that TNC use isn’t filling gaps in some of the areas of the city facing the greatest challenges in accessing mobility.

CNT’s AllTransit score is a measure of transit connectivity, access, and frequency, calculated for all US regions with populations greater than 100,000 as well as a large number of smaller regions and agencies. Compared with the rest of the country, Chicago residents enjoy superlative transit, with high frequency of service, and accessibility to jobs. Transit access does vary within the city of Chicago, however, and many of the parts of the city with the highest transit accessibility also have high TNC use (see areas highlighted in yellow below). These are areas where TNCs are likely attracting riders who would otherwise have used transit to reach their destinations. 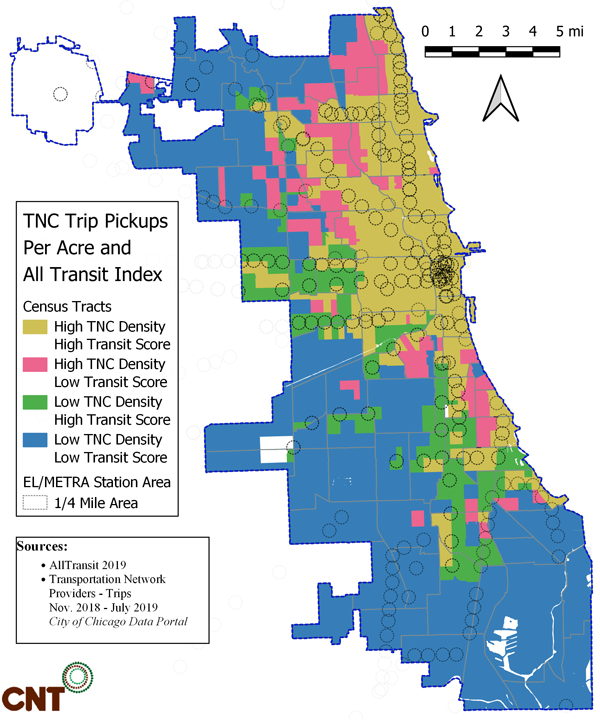 Areas in pink have high TNC use, but lower AllTransit scores. These areas, which tend to be adjacent to areas with higher transit scores, are places where TNCs may be complementing transit, but also where existing transit, particularly bus transit, may be experiencing declining ridership. There are a few areas, in green, with good transit access and relatively low TNC use, typically in lower-income parts of the City with nearby CTA rail service. In many areas, in blue, both transit availability and TNC use are low. These areas, particularly the large sections of the south side, are places where existing transit service is relatively limited, but TNCs also do not seem to be popular alternatives to existing mobility options.  Potential factors that may be limiting TNC use in these areas include lower densities, lower incomes, and higher vehicle ownership, and other barriers, such as limited access to credit cards and smartphones.

Comparing data on vehicle ownership, transit availability, and TNC use underlines a disparity between the places where people use a wide range of mobility options, including private vehicles, transit, and TNCs to get around, compared to places where access to all forms of mobility are limited. The far South Side stands out as an area where transit access and vehicle ownership rates are low, and where TNCs do not appear to be filling mobility gaps. These are also areas with high concentrations of low-income Black residents, who already spend a disproportionate share of their income on transportation. 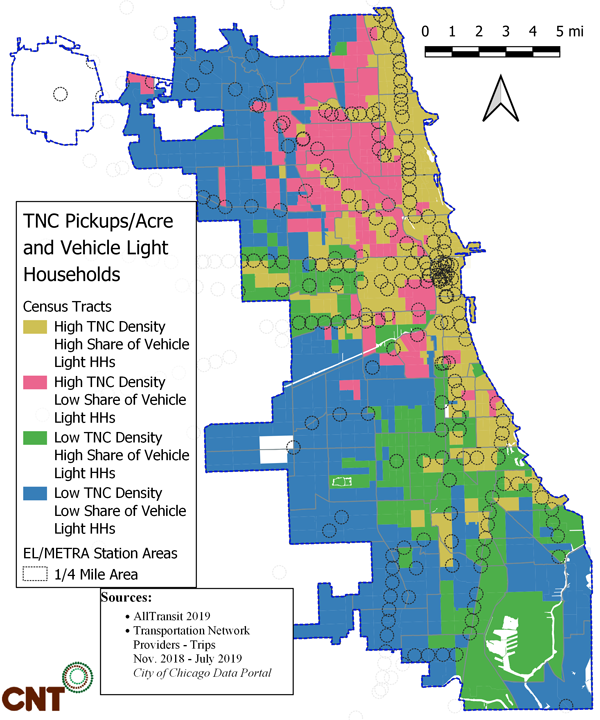 However, neighborhood demographic data does not tell us who is actually using TNCs in those neighborhoods.  A 2017 study in Boston found that TNC users had incomes comparable to the region overall, and, if anything, may skew more to the low-middle part of the income range rather than the higher end. Upcoming travel surveys from CMAP will provide some more insight into TNC use, and overall the transportation field needs more and better information about TNC use to make informed policy and investment decisions. In addition to better quantitative data, it is also critical to engage in conversations with local communities about the barriers to mobility in general, and emerging forms of mobility in particular.