The New and Improved ETOD Calculator 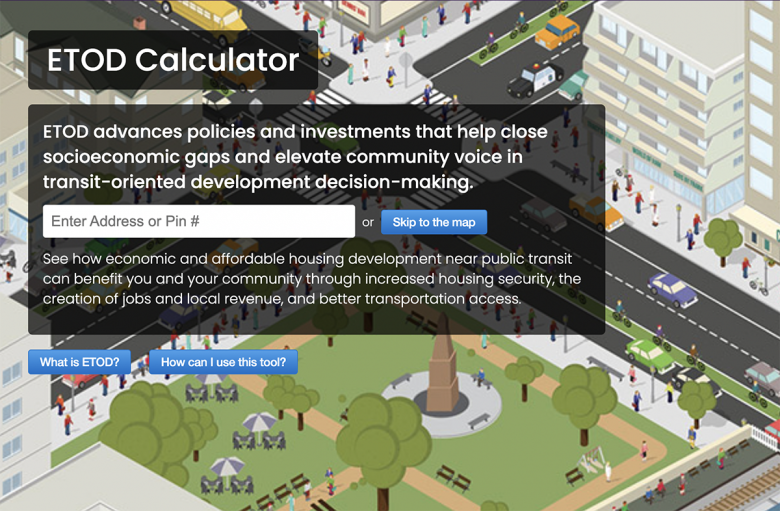 What is ETOD and Why it Matters

CNT has been advocating for transit oriented development (TOD) for more than 25 years. TOD looks like dense, pedestrian-friendly, mixed-use projects near train stops that allow people to use transit to access multiple needs like housing, jobs, education, shopping, healthcare etc, reducing their time spent on travel and reducing greenhouse gas emissions. However, as TOD has been rolled out, many Black and Brown, low-income communities have been either forgotten because developers have avoided investing in certain communities or displaced as development occurred without affordability protections. Over the course of this unfortunate reality, CNT, in collaboration with community organizations and their partners, has shifted towards advocating for Equitable Transit Oriented Development (ETOD).

ETOD acknowledges that TOD policies need to be implemented with specific actions to counter systemic racism. ETOD practices are developed in partnership with communities, following their lead to identify and mitigate unintended consequences of policies so that the economic benefits of development can be accrued to the long-term community members in all kinds of real estate markets. 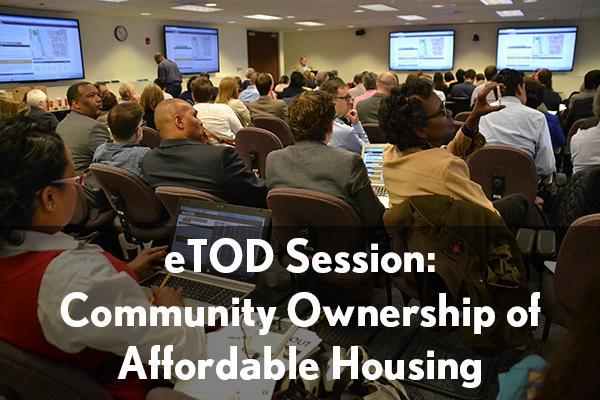 Around this time, Metropolitan Planning Council (MPC) developed a tool that highlighted the tax opportunities of building in and around transit. After creation of both tools, Elevated Chicago members sought an integrated tool that brought the best of both tools. In 2020, CNT and MPC formally partnered to create a more effective and robust tool. The new etod.cnt.org is the result of this collaboration.

The Evolution of Transit-Oriented Development in Chicago

The City of Chicago first adopted a TOD ordinance for properties around train stations in 2013, as a voluntary approach for developers to increase density while lowering parking requirements. In 2015, the ordinance increased the radius for eligible parcels and encouraged affordable housing units in projects benefiting from more density by requiring a certain percent of affordable units in each development per the Affordable Requirements Ordinance.

However, analysis of projects between 2016 and 2019 show an uneven distribution of development focused mostly on the north and north west sides of the city.1 The development led to demographic shifts, typically with increases in the white population and median household income. The intense development without affordability provisions priced out and required low-income households and shop-owners to relocate. Unfortunately, marginalized communities on the south side and westsides did not receive the same attention from for-profit developers.

In 2019, the city of Chicago, in partnership with Elevated Chicago and and its transit-served community partners, adopted ETOD to set up a policy and incentive landscape to better distribute the benefits of development to all parts of the city, including the south and southwest sides. One of these changes included extending incentives to parcels near rapid bus corridors. The 2020 ETOD Policy Plan sets up Chicago to evaluate performance of the policies and provide recommendations on how to improve the ordinance to be more equitable.

Explore the ETOD calculator at: etod.cnt.org

See how economic and affordable housing development near public transit can benefit you and your community through increased housing security, the creation of jobs and local revenue, and better transportation access.

To communicate the benefits of ETOD, CNT and MPC partnered to combine their two individual ETOD tools into one. CNT and MPC developed the tool with support from an advisory group made up of advocacy organizations, community groups, developers, urban planners, and local officials. The advisory group first identified what was helpful from both tools and what was missing, and further refined who the audience of the new tool should be. CNT worked to combine features from both tools, while both CNT and MPC reached out to the advisory group for additional feedback through a survey and 1:1 conversations. At a follow-up session, the advisory group shared their thoughts on the combined tool to identify what was still missing and how to make it more user friendly.

The new ETOD Calculator provides a detailed overview of the chosen parcel - sharing which zoning and qualified development areas it’s situated in, nearby community amenities, and the areas’s elected local officials; incorporates data from Institute for Housing Studies at DePaul University Mapping Displacement Pressure in Chicago Interactive Tool; and displays changes in demographic trends from 2000 to 2020. The Calculator also pulls in AllTransit information to show how the selected parcel’s transit, job access, transportation costs, and auto reliance scores compares to both an average TOD parcel and an average non-TOD parcel. Additionally, the webpage provides a brief background on ETOD and case studies so that users can be aware of its success.

One of the most exciting developments in the Calculator is meant to equip community advocates and developers to imagine possible development options of a parcel. Built with an interactive window, users can define a detailed building plan for the selected parcel. 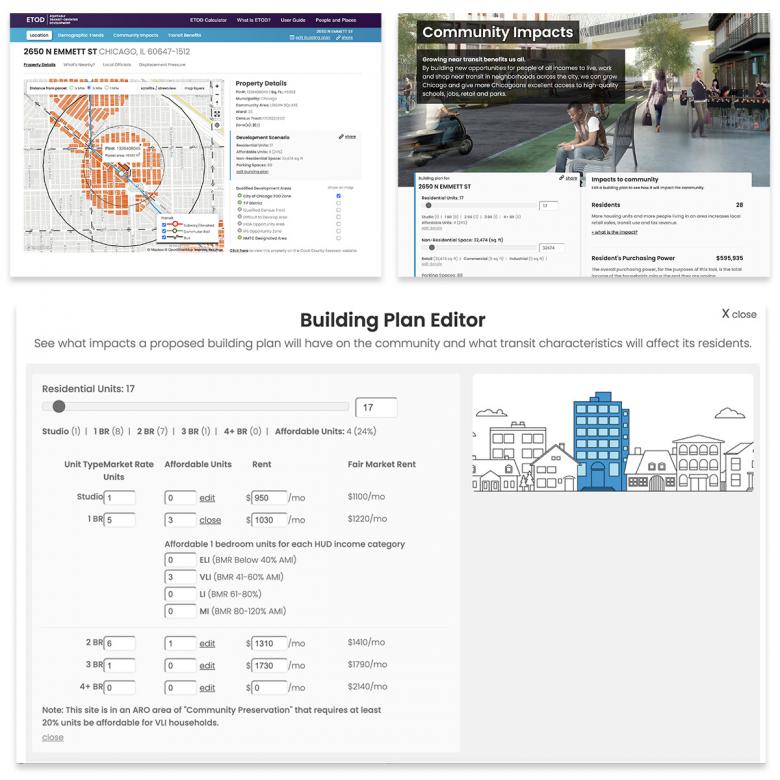 Based on the number of types of units, non-residential space, and parking spaces, users are immediately informed of the building design’s impact on the community. Some impacts measured include number of residents housed, residential buying power, on-site jobs, tax revenue, greenhouse gas emissions, and several other benefits. The intention behind this feature is so advocates can go to city meetings and champion a building plan created by and for communities.

CNT’s work on the ETOD Calculator does not stop at creation. CNT has received additional funding to pilot the tool in practice with a group of community-based organizations or mission-driven developers on specific developments. The partnerships will help further socialize the tool among organizations, provide CNT capacity to provide technical assistance on use of the ETOD Calculator, and allow CNT to learn more intimately what ETOD advocacy requires to improve the ETOD Calculator so that it better serves community needs.