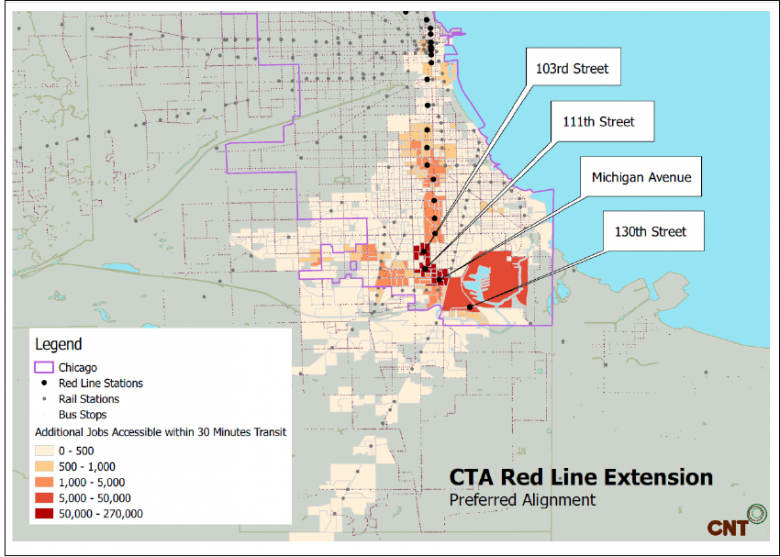 People who scoff at the significant cost of the Red Line Extension ($2+ billion) shouldn’t overlook the significant social and economic benefits it would deliver to several of the most isolated and disinvested communities in the city.

New analysis using the Center for Neighborhood Technology’s AllTransitTM tool puts numbers behind these benefits. Funded by TransitCenter, the tool allows users to enter an address and discover the existing transit conditions and how they could be improved in terms of economic and social impacts.

Public transportation is essential to economic development and opportunity, especially to areas that have been isolated and disinvested for decades, such as the Far South Side. Public transit agencies should serve more than just the most profitable, highest ridership routes, and must consider the equity impacts of any new investment.

Using the AllTransit tool to consider the social and economic benefits of the preferred alignment of the CTA Red Line Extension, the results are clear that the Red Line Extension is a much-needed investment for the Far South side of Chicago.

The demographics of the residents who live around the preferred alignment provide a foundation for the analysis.

Recently at the Transport Chicago conference in early June, the CTA Red Line Extension was debated in comparison to upgrading the nearby Metra Electric line to rapid transit style service. LaRisa Lynch from the Chicago Reporter covered the debate, which included key insights from community leaders such as Andrea Reed of the Greater Roseland Chamber of Commerce and Michael LaFargue of the Red Line Extension Coalition.

LaFargue shared that the construction of the Red Line Extension could save residents up to 87 hours in commute time per year. Andrea Reed referred to the far South side as a “transportation desert” and argued for the need for both projects.

Active Trans also supports upgrading service and tracks on the nearby Metra Electric District Line, which could happen faster at a lower cost than the Red Line Extension. Both projects are needed to bring access and investment to these underserved communities.

“The idea that we are having to choose between one or the other really speaks to the mentality in this country about how we invest in disinvested communities,” said Yonah Freemark, a PhD student at Massachusetts Institute of Technology and founder of the blog The Transport Politic.

Connection to opportunity is the key to economic development, and so the Red Line Extension is well positioned to be huge boon to the area, increasing access to jobs within a 30 minute commute by 82%.

Funding is a serious concern for the future of the project, as we have written about previously. We need a local dedicated revenue stream to fund equitable transit projects such as the Red Line Extension. Another suggestion that came up at the debate was for a TIF, such as the one created for the Red Purple Line Modernization, but one that expands upwards to major South side employment center of Hyde Park to boost additional revenue.

Active Trans will continue to campaign for local and state elected officials aligning their budgets with their stated priority of making the Red Line Extension a reality.

Join our advocacy supporters list to be alerted of future opportunities to voice your support for a local dedicated revenue stream for transit.

You can also sign up for project alerts from the CTA. Email redextension@transitchicago.com to be contacted for future project updates and to share any feedback on the proposed route.

Thanks to Center for Neighborhood Technology, chiefly Preeti Shankar, Linda Young, and Paul Esling, for conducting a pro-bono analysis of the proposed Ride Line extension route using their AllTransit tool, funded by TransitCenter. 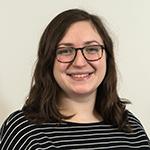 Julia Gerasimenko is the Advocacy Manager at Active Transportation Alliance, a non-profit advocacy organization whose mission is to promote walking, bicycling and public transit to create healthy, sustainable and equitable communities around Chicagoland. She dedicates her time to working with communities within the city of Chicago, including the communities surrounding Lake Calumet and the future Red Line Extension. She also leads up Active Trans’ public transit advocacy, with a recent focus on improving the speed and reliability of the bus network. She has never owned a car and has no plans to currently.

The New and Improved ETOD Calculator
CNT Develops Mobile Web App for Walkability Assessments
From Screen Time to Real Time: Understanding Southeast Side stories through today's oral histories
The Problems With the justice40 Screening Tool, and Some Ideas for How to Improve It
Rising Gas Prices and Total Diving Costs
View All