AllTransit™ is the largest source of transit connectivity, access, and frequency data in America. It offers tremendous potential for planning applications to increase our understanding of the value of transit, as well as to enhance service and operations planning. 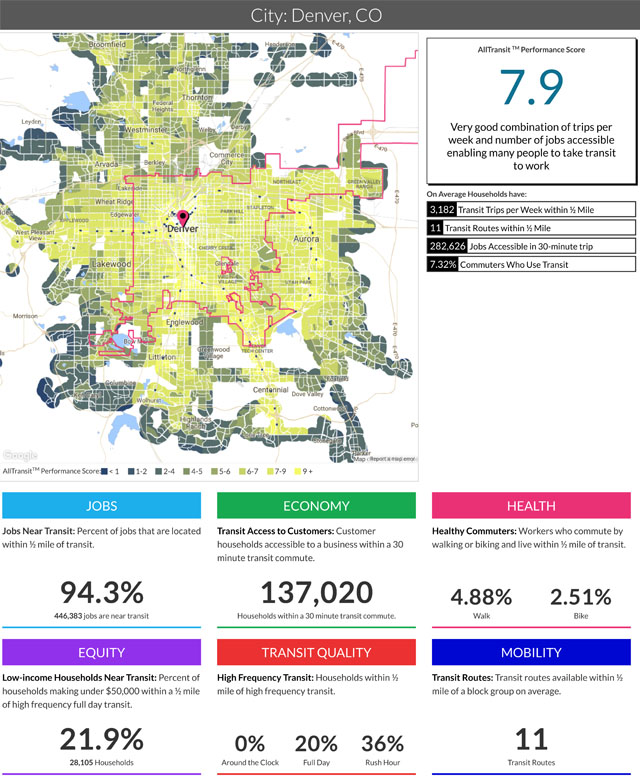 AllTransitTM is a proprietary dataset we created to measure transit access and connectivity across the United States. It was developed to rapidly create new GTFS data and easily import and normalize publicly available GTFS data.

In addition to the publicly available GTFS data provided by transit agencies, we have created GTFS structured datasets for all major agencies in regions with populations greater than 250,000 as well as a large number of smaller regions and agencies. AllTransit has station, stop, and frequency data for bus, rail and ferry service for over 900 agencies.

AllTransit data has been used in our Housing + Transportation Affordability Index and measures of transit access include Transit Access Score, Trips Available per Week, and Jobs Available in a 30 Minute Transit Ride. We are currently working on the development of other metrics and applications using the dataset  In 2019, CNT updated AllTransit with support by Bosch, adding all publicly available GTFS data for U.S. transit agencies, including 55 new agencies, and updated demographic data to latest American Community Survey Five-Year Estimates, released in December 2018.

AllTransit was featured on Planetizen's Top Websites of 2016, an annual list of the best planning, design, and development websites, representing some of the top online resources for news, information, and research on the built environment.﻿ View the list here.

AllTransit Webinar from CNT on Vimeo.