This has been a wet summer. Thunderstorms, hail, and flash flooding have all hit Chicagoland lately. The Chicago Tribune recently reported that over the past decade, only coastal cities with hurricanes have received more federal aid for flooding. And according to the Third National Climate Assessment, heavy, sudden storms – the kind most likely to overwhelm our local sewers and create flooding – are predicted to worsen as a result of climate change.

Flooding has severe impacts on health and well-being. A study by the Lawrence Berkeley National Laboratory estimates that twenty-one percent of asthma cases are associated with building dampness or mold conditions, which are common effects of flooding. And in a Center for Technology survey of flood victims, 84% reported stress; 13% reported ill health; 41% lost the use of part of their property; 63% lost valuables; and 74% lost work hours in order to handle repairs to their home. Flood damage insurance payments to Chicago residents over a nine-year period totaled more than $400 Million.

Flooding on Chicago’s Southeast Side

Southeast Environmental Task Force (SETF), a community-based environmental justice organization based in Chicago, is leading fierce fights for environmental and climate justice. SETF, which is led by area residents, has been a watchdog for industrial polluters and government agencies, holding them accountable for risky industrial practices, weak regulations, and insufficient community engagement.

SETF interviewed local families about their recent flooding experiences. Families reported flooded basements from sewer backups, and flooded streets and yards from excessive runoff.  Urban flooding is a serious issue everywhere, but it’s exacerbated in industrial corridors like Chicago’s Southeast side. Residents are concerned that flood waters may pick up toxic hazards as runoff flows over Superfund and brownfield sites. 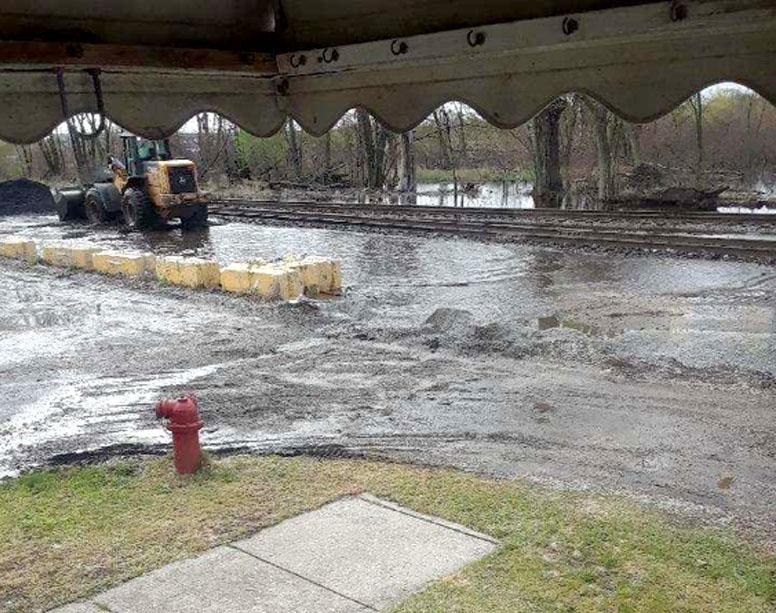 “My parents had some larger puddles and water, soot, and sand that was coming up through pipes and the basement toilet. It was essentially the city’s fault, but they had to have three different certified plumbers come out to tell them that before the city would come out and address it. It took months and thousands of dollars. My mother is on disability and my dad is retired on Social Security so my sister who resides with them helped as well with paying for the repairs.”
– Gina Ramirez, Eastside resident 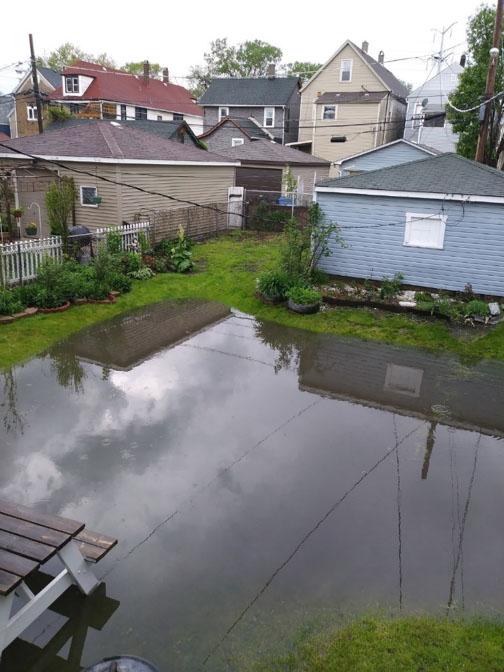 A new study by CNT shows that flooding does not occur equally across Chicago. CNT looked at insurance data for flood damage-related claims paid to Chicagoans between 2007 and 2016. 87% of flood damage insurance claims were paid in communities of color.

Just thirteen zip codes represent nearly three-fourths of all flood insurance claims. Over three-quarters of a million residents live here – including 200,000 children and 100,000 elderly. Over a quarter of households are below the poverty line. And 93% are households headed by a person of color.

By contrast, seventeen Chicago zip codes had the fewest flood claim payments between 2007 and 2016 (less than one percent combined). Only 30 percent of residents in these areas are people of color. What Is Urban Flooding?

Stormwater infrastructure investments need to be guided by a unified approach, as recommended by Mayor Lightfoot’s Transition Report. Currently, stormwater management is fragmented between many agencies. Our city needs an inclusive and transparent public planning process to guide the funding, siting, construction and long-term maintenance of stormwater infrastructure.

A number of local solutions are ready to be expanded across Chicago, such as Space to Grow’s green school playgrounds, and CNT’s RainReady building retrofit program, now being piloted in the Chatham community. The Calumet Stormwater Collaborative brings together several public and private sector organizations to address adverse  stormwater impacts in the Calumet Region.

But most importantly, all projects and policies must be developed through a community-first approach, and in partnership with Chicago’s residents and environmental justice leadership. Southeast Environmental Task Force, along with the Southeast Side Coalition to Ban Petcoke, are members of Calumet Connect, a collaborative of environmental and community organizations. Calumet Connect, which is guided by an advisory council of resident-governed community organizations, is developing a neighborhood data book that can be used for future neighborhood planning efforts. They envision a future where equitable climate-resilient development in the Calumet Industrial Corridor is a reality.

If you’re interested in getting in touch and learning more about Calumet Connect and environmental justice issues on the Southeast Side, please contact Olga Bautista.

This post is written by Marcella Bondie Keenan, Program Director at CNT, and Olga Bautista, South East Side Community Planning Manager at Alliance for the Great Lakes and Southeast Environmental Task Force board member. Olga has dedicated her professional career to improving the quality of life in her community on Chicago’s Southeast Side, which she continues to do in her role as Community Planning Manager. Olga has leveraged her expertise as a facilitator, advocate, and thought leader to advance the Alliance’s green infrastructure initiatives and clean water priorities. As Community Planning Manager covering Chicago, Olga elevates and champions equitable land use decisions in her beloved Southeast Side. In addition to her role at the Alliance, Olga is a board member of the Southeast Environmental Task Force (SETF) and a Mentor to the youth girls organization, Rebel Bells.