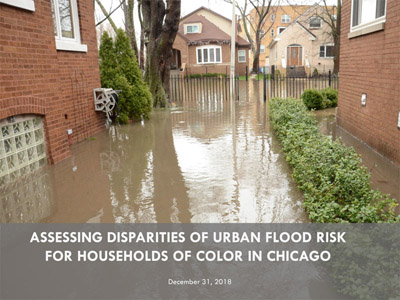 In a 2014 report, Center for Neighborhood Technology’s (CNT) analysis revealed the repeated occurrence of flooding in areas outside federally designated floodplains within Cook County. This flooding, called urban flooding, is caused by climate change, aging infrastructure, and diminishing permeable space in cities.

In 2018, CNT expanded the 2014 research to conduct detailed analysis of flood claims data in the city of Chicago.

This closer examination of data for the city of Chicago was undertaken to determine the prevalence, cost, and impact of flooding on communities of color in Chicago.

Using the dataset, CNT found that flood claim payouts were made in 56 of the 59 zip codes that intersect and are within the city boundary, between 2007 and 2016. In total, the 229,743 claims amounted to $433 million in payouts.

87% of flood damage insurance claims were paid in communities of color.