Our long history of energy efficiency work, which continues today under our partner Elevate Energy, helped transform the way people use and think about energy. 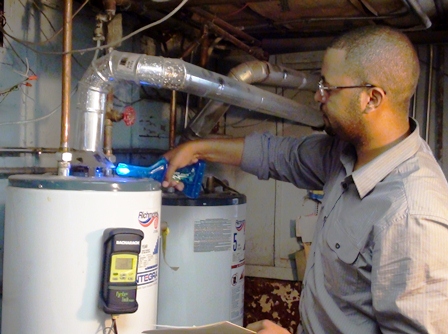 In the year 2000, we announced the establishment of the Community Energy Cooperative, a partnership with Commonwealth Edison, which focused on communities where growing electric demand was pushing local capacity near the breaking point. The Cooperative helped residents and businesses reduce the amount of electricity they used through strategies like energy-efficiency,  generating power locally, and “demand response.”

In the demand response deal, ComEd paid the Cooperative when its members reduced their energy use as power was needed elsewhere in the system. The Cooperative enrolled mid-size commercial and industrial businesses in load-management programs, where they installed energy-efficient equipment, curtailed their electricity use, or used on-site generators (a Cooperative-subsidized purchase) instead of electricity from the grid. Demand response was valuable; members could earn $12,000-$20,000 over the course of one summer. A portion of all energy reduction revenues were paid into a fund set up by the Cooperative to support community development, and a small portion supported the Cooperative’s operational expenses.

Three years later, the Cooperative worked with ComEd to launch a pilot project called the Energy-Smart Pricing PlanSM (ESPP). ESPP was the first program in the nation to allow residential customers to pay hourly, market-based electricity prices. The theory behind the program was that, given access to the right information, households could respond to hourly prices and shift some of their electricity use to off-peak times when the prices tend to be lower. This could result in savings for customers, while reducing strain on the electric infrastructure during peak times.

The ESPP project helped to pave the way for the expansion of hourly electricity pricing in Illinois. In 2006, the Illinois General Assembly passed legislation requiring the major electric utilities in the state to offer their residential customers an hourly pricing option. This led to the 2007 launch of two full-scale programs: the ComEd Residential Real-Time Pricing (RRTP) open to ComEd customers in northern Illinois, and Power Smart Pricing from Ameren Illinois, the utility serving central and southern parts of the state. Both programs work much like the original Energy Smart Pricing Plan, giving customers access to hourly electricity prices set in the wholesale market.

In 2007 the Cooperative became CNT Energy, and set out to help retrofit apartment buildings with the launch of the Energy Savers program, a service available to owners of multifamily buildings in the seven-county Chicago region and the city of Rockford.

The Energy Savers program has retrofitted tens of thousands of units in the years since it launched. In 2014, CNT Energy became Elevate Energy. Elevate continues developing new energy efficiency services, policies, and initiatives.