Before the internet, collecting community data on housing and building conditions was an arduous task. Our Neighborhood Early Warning System (NEWS) changed all that. 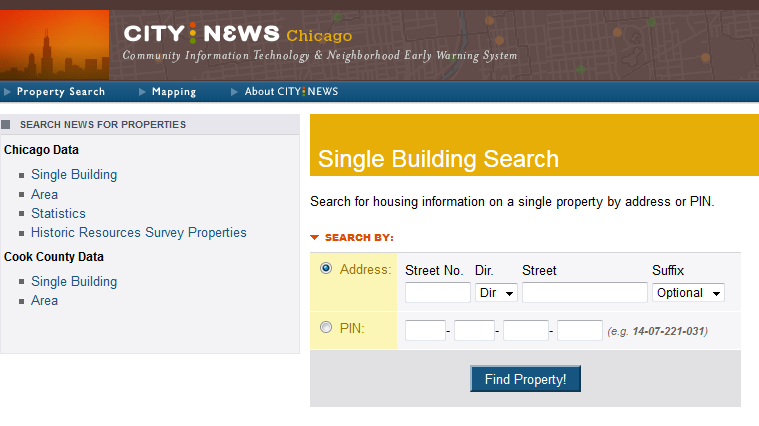 In 1984, Chicago's Housing Abandonment Task Force (which we helped launch) issued over 30 recommendations for conserving Chicago’s affordable housing, yielding programs and organizations that addressed equity financing, energy conservation financing, housing cooperatives and public access to housing information. We used some of these recommendations to ultimately create the Neighborhood Early Warning System (NEWS) was developed to address the lack of transparent information on housing and building conditions.

NEWS was created as an alert system for residents where they could see “at risk” buildings in their area. As housing was being abandoned and buildings were being demolished, NEWS provided a way for community organizations and citizens to be aware of underlying information about buildings in their community.

This was a time way back before the Internet, laptop computers, digital tablets, and smartphones. It took some legwork to get information. For an organization to collect information about a troublesome building in their neighborhood, they had to assign staff to go to Chicago City Hall and/or the Cook County Building and jump through hoops until they (maybe) acquired some of the information they were seeking. We recognized this problem and decided to do the legwork by gathering the data and creating a tool.

Examining all the data that was produced by city and county agencies, and looking at what would be useful and available, we developed a set of seven problem indicators: code violations, housing court cases, water arrears, current and longer-term property tax delinquencies, fire records, and real estate sales. The first edition was released on several floppy disks that were sent out to participating community organizations.

In addition to the disks, community organizations received updates and training from CNT staff members. In the late 1980s and early 1990s, this system was enhanced by using a dial-up service, which offered reports on each of the seven indicators.

After the advent of the Internet, we received a NTIA Technical Opportunity Program (TOP) grant from the U.S. Department of Commerce under the Clinton administration to explore opportunities for using the Internet to enhance community development. One of the grant projects was to improve NEWS, so we took this opportunity to put NEWS on a website. This was in 1996, before many of the web capabilities we take for granted today were available. This lead to other innovations, such as rating each building with a green, yellow, or red light based on the data and its indicator.

In the early 2000s, we were awarded grants from the Fannie Mae Foundation to build our first mapping website. With this and grants from The Polk Bros. Foundation and Sara Lee, NEWS was expanded to show what we called community indicators, things like average income by census tract, or percent of household below poverty.

NEWS became an important tool for Chicago and eventually for other Cook County communities. By the early 2000s, you could also search for nearby schools, IGO cars, transit stops, donut shops, and much more, which was revolutionary in the pre-Google Maps days. This tool was recognized nationally and was reproduced on several occasions; the highest-profile version was Neighborhood Knowledge Los Angeles (NKLA), run out of UCLA’s planning department.

NEWS built a strong foundation and inspired many of our current tools, like the Housing + Transportation (H+T®) Affordability Index and Abogo®. While the data was last updated in 2003, the NEWS site is still accessible.