The Problems With the justice40 Screening Tool, and Some Ideas for How to Improve It

The Center for Neighborhood Technology (CNT) has been a strong supporter of the concept of Justice40 since its announcement in early 2021. The goal of this program is to direct at least 40% of the benefits of federal investment to communities that have historically been left behind. Defining those communities is critical, and the federal government attempted this with the release of the Climate and Economic Justice Screening Tool in February 2022. 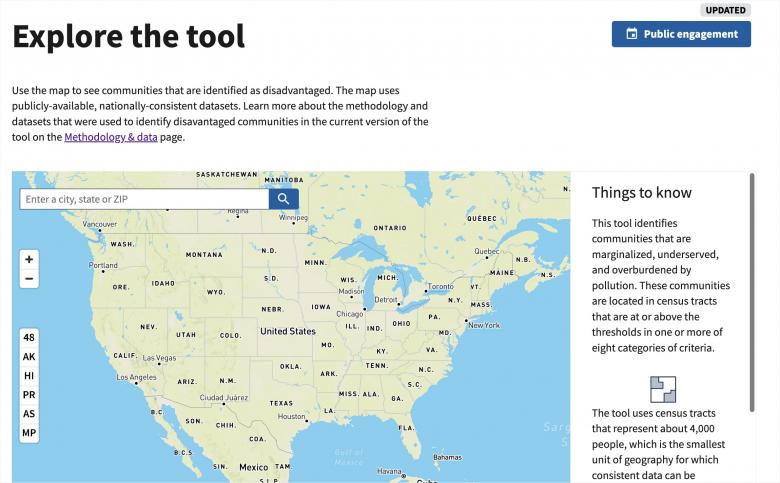 A thorough breakdown of the methodological flaws in the definition can be found in CNT’s formal comments. To briefly summarize: one of the biggest flaws is its requirement that tracts meet two socioeconomic indicators to qualify, but these indicators set arbitrary cutoffs that exclude areas that do actually have significant challenges. For example, one Census tract in Greater Grand Crossing, on Chicago’s south side, is excluded because it barely misses the income threshold used in the definition, which measures the share of residents whose incomes are below 200% of the poverty line. Using other measures of income – like the share of population below 100% of the federal poverty line, or the median income as a percent of the area median income – it would have qualified. It only does not because of the specific indicator that is used. Nearby, in Woodlawn, another tract does not qualify because the definition excludes any Census tract where more than 20% of the population are currently students. In this tract, the number is 21% – so despite significant environmental and economic challenges, it is excluded, because it misses one threshold by one percentage point.

These are not isolated examples. Our interactive mapping tool found hundreds of Census tracts that had significant cumulative environmental burdens but were not considered disadvantaged areas because they barely missed one of the socioeconomic cutoffs. These exclusions are the unintended consequence of using arbitrary cutoff points that are applied to all Census tracts regardless of the degree of environmental burdens that these places face. 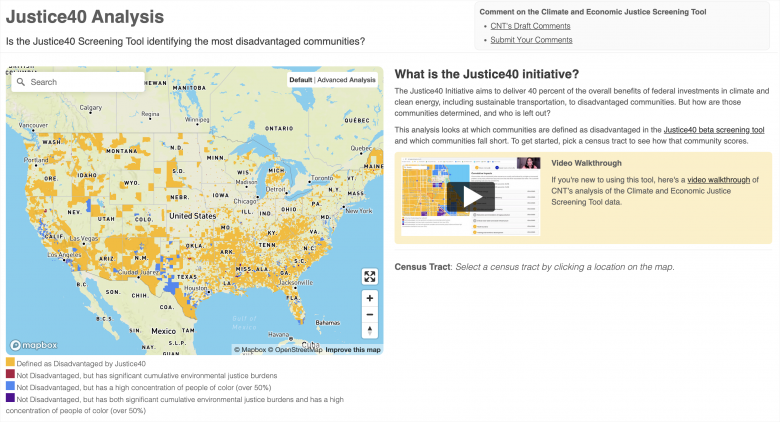 There are other problems with the methodology and the data behind it too. Most significantly, the exclusion of race from the definition of disadvantaged areas leaves out a powerful predictor of environmental burdens, due to our nation’s legacy of environmental racism. Beyond that, the source for most of the data, the EPA’s EJScreen, lacks local specificity in many of its indicators, like air quality or health. These national-scale datapoints do not tell the whole story about local conditions, which is why involvement of local community groups in any process to identify disadvantaged areas is so important.

These flaws could have been avoided had there been an inclusive effort to involve local partners in defining disadvantaged areas – but there was not. The gaps created by the definition’s methodological flaws are glaringly obvious to environmental justice groups that serve the affected areas, and their knowledge could have been used to identify and correct them. The lack of consultation of affected groups is a major deficiency in the process, and one that we are strongly urging the federal government to correct.

Our criticisms of the definition of disadvantaged areas do not mean that the concept is fatally flawed. The methodology can be improved in several ways: using an index rather than a threshold approach; allowing alternative socioeconomic criteria or a sliding scale for their use; creating tiers that distinguish between levels of disparities; and allowing local substitution of data when it is an improvement over federal data. More detail on all of these is in CNT’s formal public comments. Most importantly, any further work to define disadvantaged areas needs to engage community groups as true partners.

If you have your own thoughts on the federal definition of disadvantaged areas, we encourage you to submit them before the deadline of May 25:
https://www.regulations.gov/document/CEQ-2022-0002-0023.

Justice40 has great promise, and we hope that our analysis – and the many comments the federal government is receiving – improves how it is put into practice.