The Consortium to Lower Obesity in Chicago Children (CLOCC) has been partnering with community-based organizations (CBOs) for more than a decade to identify and address barriers to walkability in their neighborhoods.  To do this, CLOCC developed their Neighborhood Walkability & Accessibility Assessment Tool (NWAAT), first as a paper and later as an on-line survey tool, providing CBOs with an instrument to gather data used to support their requests to the City of Chicago for local pedestrian infrastructure investment.  However, the process of collecting, digitizing, aggregating, and analyzing those data was long and cumbersome for both data collectors and CLOCC.

CNT had the opportunity to work with CLOCC in 2021 to transform their NWAAT survey tool into a new NWAAT mobile web app. After piloting the new app with Palenque Logan Square Neighborhood Association (Palenque LSNA) last fall, CLOCC formally announced the completion of the project in May.

CLOCC conducted a series of focus groups with CBOs to gather feedback on their experiences using the previous NWAAT surveys tools and input on features that would be useful in a new mobile app.  Participants identified several great feature ideas that we were able to implement, including geolocation and guidance to orient the data collector, the ability to submit photos with survey responses, and the ability to submit Chicago 311 requests as they encounter different issues. 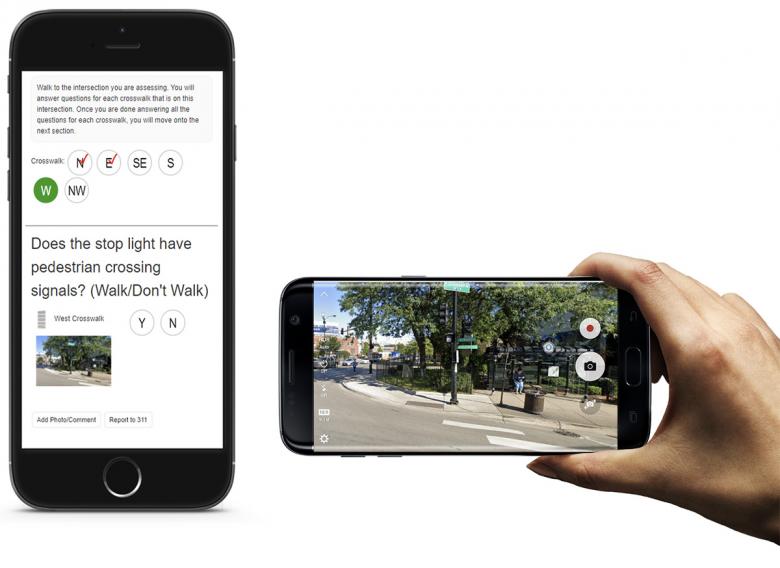 A single NWAAT assessment includes questions about the infrastructure, conditions, and safety for each crosswalk at an intersection and each side of the street for one block.  These assessments are typically repeated by multiple data collectors and then aggregated to identify the highest priority issues.  As a simple survey CLOCC would often encounter discrepancies and inconsistencies in the identification of each intersection, crosswalk, and block.

CNT was able to eliminate several steps and greatly reduce the amount of work that CLOCC went through in order to analyze and draw conclusions from the data.  As a mobile web app, the NWAAT is now able to identify and snap to the nearest intersection based on the device location resulting in consistent naming and map coordinates for each assessment. 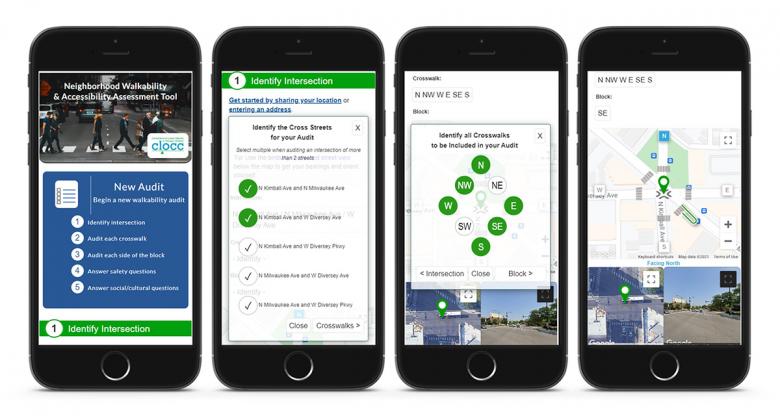 Furthermore, the new NWAAT now displays an ever-present map that clearly identifies the intersection, each crosswalk, block, as well as Google’s aerial “bird’s eye” view, and Google Streetview all to help data collectors orient themselves as they are working their way through the survey.

CLOCC designed the survey to be thorough but simple for data collectors use with mostly Yes/No questions, but for times when a data collector would like to share more information, we have provided a way to attach comments and/or photos to every question in the survey, as well as a way to report issues to Chicago 311.

As CLOCC points out in their announcement, our political leaders and government agencies are beginning to prioritize the spending of Illinois’ $1.4B share of the Bipartisan Infrastructure Investment and Jobs Act, and both CLOCC and CNT signed on to the Letter from Organizations Calling on Illinois DOT to Follow U.S. DOT Guidance on Investing Bipartisan Infrastructure Bill Money Equitably & Sustainably addressed to Governor Pritzker and Secretary of Transportation Osman.  We are happy to have worked with CLOCC in developing the new NWAAT mobile app and eager to hear how the data collected through this app helps guide our state and city in prioritizing and implementing equitable and sustainable pedestrian infrastructure.